Shamshir-e Zomorrodnegar, the emerald-studded sword, is mentioned in the Persian epic of Amir Arsalan. In the story, Fulad-zereh, a giant horned Ifrit, is led astray from his duties as head general to the King of the Peri by his fondness for beautiful women. In love with the queen, he takes advantage of the King’s death to turn the heir to the Peri king’s throne and all his castle’s inhabitants to stone. After spending time flying around trying to whisk away more lovely ladies, he learns that the hero Amir Arsalan is the only one who can slay him. The Ifrit’s powerful witch of a mother enchants his body to resist all weapons, with one notable exception: Zomorrodnegar.

The emerald-studded magic shamshir had originally belonged to King Solomon, and both worked as a magic charm and inflicted wounds treatable only with a potion made from brains. Fulad-zereh’s brains, to be exact.

Not eager to have his only weakness exposed, the Ifrit keeps Zomorrodnegar for himself, but falls in battle to Amir Arsalan, who then creates a gruesome concoction of the burnt remains of Fulad-zereh and his mother. The hero sprays the potion over the petrified castle, rescuing the court.

A shamshir like Zomorrodnegar has a deeply curved blade and is typical of swords from the 16th century in Persia and India. Prior to the 9th century, swords in Persia were straight and double-edged. The curved edge of a shamshir facilitated slashing attacks while on horseback.

As over the top as jewels on a sword might sound, ornate weapons that worked more as pieces of art than the means to kill other people are hardly rare, as the example at the top of this post (from the Metropolitan Museum of Art) demonstrates.

Below are more examples of  of 18th Century Ottoman shamshirs, complete with decorative scabbards: 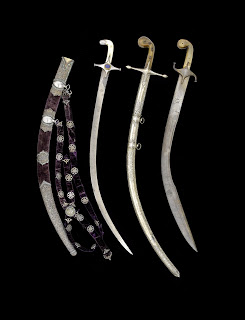 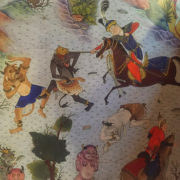 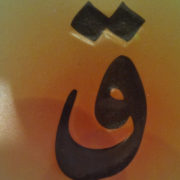 Review of “The Wrath and the Dawn” by Renee Ahdieh

“Destroyer of Thousands”: The Mace as Weapon and Symbol of Powe...
Scroll to top