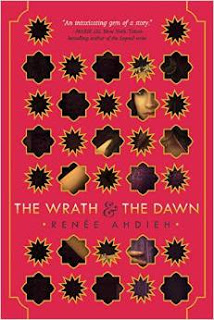 The Wrath and the Dawn is a YA retelling of 1001 Arabian Nights. Or, I should say, a retelling of the Arabian Nights‘ frame story, of a brave young woman who volunteers to be the bride of a serial killer ruler who murders his new brides the morning after their wedding night. Needless to say, this backstory is a little problematic for the modern reader. In The Wrath and the Dawn, the nesting tall tales that the original is famous for take a back seat to the main story, a romance between the latest bride Shahrzad  and the killer Caliph Khalid. There is a convoluted explanation for Khalid’s mass murder spree which comes out late in the novel, but the main character’s early attraction to a man who murdered her best friend (and many other young women) left a bad taste in my mouth. Overall, it was too reminiscent of a storyline where a rape victim falls in love with her assailant.

As is evident from the thumbnail, the book’s cover is gorgeous, and I had high hopes for the story inside. The novel does have solid writing, and a lovely amount of detail that evokes a sense of medieval Arabic life and culture. What it lacks are characters that fit into that world. Shahrzad comes across as more whiny than heroic, and her bizarre interactions with her handmaiden don’t help. Khalid as a tortured romantic soul who –gosh darn it!– doesn’t want to be a mass killer of young woman, didn’t cut it for me. Sharzad’s other heartthrob, Tariq, who dashes around on an Arabian horse accompanied by a killer falcon, had more potential. Unfortunately, his character simply walks away from a major conflict at the end, leaving me confused. In fact, the second half of the book, between the unlikely actions of the characters and the improbable plot twists, left me bewildered. To make matters worse, the novel is actually book one of a trilogy, not a fun thing to discover as you turn the last few pages.

Despite the fantastic background and setting, I’ll be giving the rest of the series a pass. There’s no explicit sex (in fact, I think some well-written sensual scenes might have added to this book) and a standard amount of sword slashing and violence.

The Emerald Studded Sword of Ancient Persia
Scroll to top