Art of the Arab Lands: A Day at the Metropolitian Museum of Art 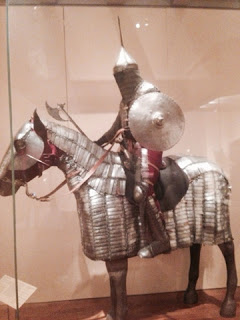 After an amusing night watching Disney’s homage to Orientalism, Aladdin, I spent a day at New York City’s amazing Metropolitan Museum of Art exploring their galleries devoted to art of the Arab lands, including a huge Islamic arts collection.  Due to the presence of two younger children, it was hardly a hardcore research experience, but I managed to catch a glimpse of some of the beautiful pieces on display in the galleries before the inevitable descent into lunch and a visit to the gift shop. 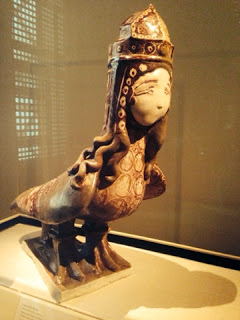 12-13th century harpy, from Iran.  Although usually seen as an evil female-headed winged monster in Western traditions, the harpy may have had more benign associations in Islamic art, seen a protective symbol and a representation of the planet Mercury. 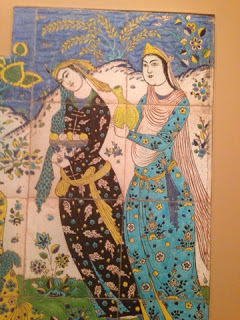 Beautiful Persian ladies with drinks and snacks for a picnic! This is part of a stunning tile wall mural. 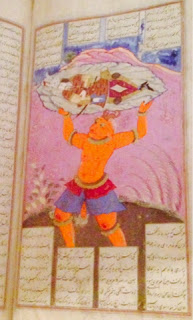 Although art from Islamic periods is often associated with stylized calligraphy and the avoidance of figural representations of humans, this striking illustration from the Persian epic The Shahnama shows a Dev, or demon, about to throw the hero into the sea. Spoiler: hero defeats demon in the end. 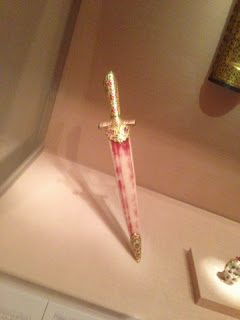 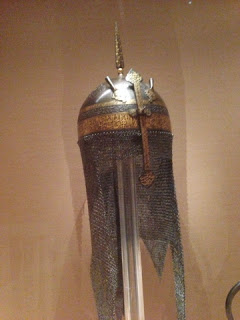 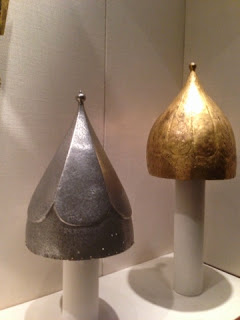 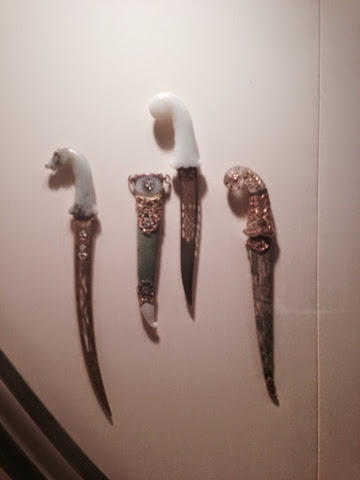 “Islamic arms and armor” often refers to specific time periods in history: the Mamluk Era, Ottoman Empire and Mughal rule in India.  Distinctive conical helmets and curved swords are associated with this style, and many working weapons and armor had elaborate decoration that turned the deadly objects into works of art.

Jewel-studded swords, life-sized knights and their horses in full decorative armor, and stunning carpets (none of them flying, however):  check out the Met’s fantastic collections with a trip to NYC or at least visit their great website.

Like Drops Through the Water Clock: Ancient Time-Telling Inventions