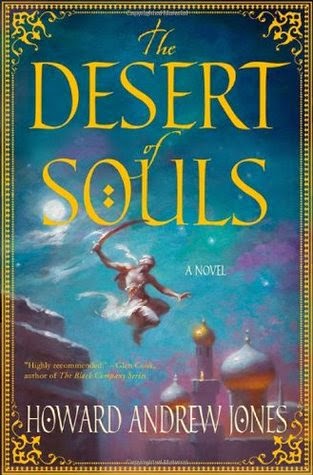 A wonderful sword and sorcery tale set in medieval Baghdad, “The Desert of Souls” is close to historical fiction in its beautiful detail about everyday life in the Islamic golden age. The action is fast-paced and gripping. The historical notes about 8th Century Baghdad life are amazing, but the author succeeds in slipping in all the backstory without slowing down a rollicking sword and sorcery tale. The two main characters, Asim and Dabir, play off their respective roles as swordsman and scholar to take on a range of magical dangers.

As in many novels revolving around Middle Eastern mythology, the Jinn are a malevolent force here. Key mythology points from the legends, including the story of the lost city of Ubar, swept away in a great sandstorm, are woven into the plot. Also included is a sense of the religious diversity of the time, where followers of the Zoroastrian religion play a key role. Religion is handled in a straightforward manner, as a key component of the character’s lives, which fits in well with the historical time period.

My main disappointment with the novel was the limited handling of female characters. Jones sets up a great young female character, Sabiyah, who rebels against her expected role as a wife and mother and thirsts for knowledge. But she ends up more as an unattainable love object rather than a flesh-and-blood character, and she is whisked away at the end of the book into an arranged marriage.

I finished the book in one day, and would highly recommend it. It’s one of the few novels I’ve come across, along with Saladin Ahmed’s “Throne of the Crescent Moon”that uses a medieval Arabian setting for a sword and sorcery epic. The novel has the amount of violence most fans of traditional fantasy would expect, and although there is a romantic subplot, no sex to speak of. It’s not aimed at a YA audience, but older teens interested in fantasy might find it interesting. I’m excited to read the next novel in the series!

Review of “Hearts Before Diamonds” by Bryan Fields
Scroll to top