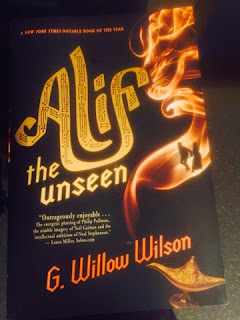 In a near-future city, Arab-Indian hacker Alif (the first letter of the Arabic alphabet) sells his illegal skills to the highest bidder while dreaming of a future he can’t have with his aristocratic lover. Meanwhile, the devout, niqab-wearing girl next door warns him that the local mouser may be more than she seems: “All cats are half jinn, but I think she’s three-quarters.”

What follows next is an exciting urban fantasy set in the Middle East that blends thriller elements with a strong romantic subplot. Wilson, an American convert to Islam who wrote about straddling two different cultures in her memoir, The Butterfly Mosque, pulls in different religious concepts about the Jinn to populate her story-world. She includes an appendix with great graphic depictions of the five types of Jinn, and incorporates the concept of the ‘Unseen’ as having free will, including the choice of what religion to follow. Unlike most fiction, which treats the Jinn as creepy monsters or wish-fulfillment machines, ‘Alif’ depicts them as complex characters who are more sympathetic than the police state the hero struggles against.

Themes of autocracy, as well as ethnic and class differences, are woven in nicely and provide a glimpse of the diversity of the ‘Arab Street’ so often talked about by Western journalists. Especially refreshing is having a POC protagonist from the culture being described, and details of Muslim women’s religious dress are treated as part of the story, without exoticism.

I had a few quibbles with the story. I found a side character who was too much based on the author herself less interesting than Alif and his companions, and I wanted to read more about the world of the Jinn and how their magic worked. Overall, though, I enjoyed the book and didn’t want to put it down. There’s strong romantic tension and great pacing, and the novel would appeal to a broad spectrum of readers. There’s no explicit sex, and the violence is not graphic, so some teens might find it a great read as well.

Is an On-Line Writing Class Right for You?

A Bureaucracy of Magic: A Review of The Bartimaeus Trilogy
Scroll to top